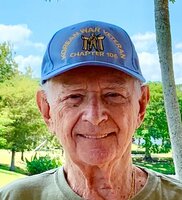 William H. Bunker, 92 of The Cabana’s at Jensen Dunes in Jensen Beach, Fl. and former
Rexford resident, passed away on Saturday July 23, 2022 at his residence. William was
born in Brooklyn, NY on June 21, 1930 and was the son of the late Howard and
Catherine Kaiser Bunker. He was a graduate of Pratt Institute and lived in Queens until
2015 when he moved to Rexford. He was the beloved husband of the late June M. Purcell
Bunker who passed away on March 17, 2017. He was an Army veteran who served
honorably from 1951 – 1953 during the Korean Conflict. William had been a Display
Production Graphic Manager for JC Penney in Manhattan for over 35 years. He was a
dedicated Mets fan which lead to his move to Florida in 2019 to be near Mets Spring
Training. He was recently honored at a St. Lucie Mets charity event where he lead the 5 th
inning stretch in singing “Take me out to the Ballgame”.

He is the devoted father of June Dawn Thorpe (Darrin) of Port St. Lucie, FL; cherished
grandfather of Samantha Boras of Scotia and Spencer Boras of Albany and step-
grandfather of Jacob and Kyle Thorpe of Loudonville, NY

A military service will be planned for September at Saratoga National Cemetery.