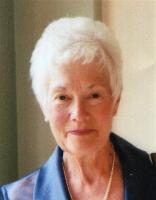 Marilyn Anne Sandberg (also known by some as "Cider") resided at the Home of the Good Shepherd in Malta, N.Y. She passed away on October 1, 2016, while in Saratoga Hospital with Hospice Care after experiencing a traumatic fall. The fall took her physically; the Alzheimer's disease slowly robbed her of her mind and memory. Born on January 14, 1932 in Aurora, Illinois, Marilyn was the only child of the late Roy Ernest and Eloise Clara Anstensen Seidelmann. She grew up in Aurora, and attended the University of Illinois earning her Master of Arts degree in 1957. She came to Clifton Park, NY in 1962 where she taught English at the Shenendehowa High School for nearly 30 years. In fact, when she retired from "Shen" in 1991, she had been teaching there for half of her life! As an English teacher, Marilyn hoped to share her love and appreciation of the written word with her students and left lasting impressions on many. An avid reader and writer herself with lists of books to read, stories to write, book groups and writing groups to attend, and volunteering to do at the local library, she wanted to make the world a more literate place. She also wanted to make the world a better place and was a dedicated supporter of many environmental, political, animal and human causes. A lover of birds, books, travel, the arts, quiet mornings, the stars and nature, and always with a cat or two by her side, Marilyn was a listener rather than a talker for everyone has a story to tell. She put others before herself, was not one for the spotlight and was generous to a fault. Technologically challenged and perhaps a bit old school, she wrote her letters by hand, played Solitaire with actual cards and enjoyed the scent of the pages of books. In times of trouble, she would say, "this too shall pass". She was always right. Those who knew her recognized Marilyn as a very special woman, trusting, wise, kind and gentle and at times with a rare and refreshing innocence about the world and its trickery. Marilyn, also named "Grammy" by her only grandson Nicholas, was everything and more a grandmother and mother should be including a best friend. Marilyn was the wife of the late Wesley E. Sandberg of Malta and was always there for him; loving mother of Lisa (David) Hodgkinson of Scotia; and doting grandmother of Nicholas Allen Hodgkinson of Scotia, Grammy's provider of lady bugs and luck. Services will be held at the Gordon C. Emerick Funeral Home 1550 Route 9 Clifton Park NY on Saturday, October 8, promptly at 10am. Immediately following the services, Interment will be held in the Jonesville Cemetery, A Victorian Resting Place For All, for the family. Flowers for the service are welcome. In lieu of flowers, donations may be made to Alzheimer's Association of Northeastern New York 4 Pine West Plaza Suite 405 Albany, NY 12205