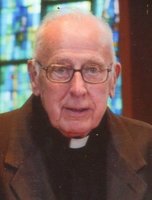 Rev. Lawrence G. McTavey, 88, passed away on Dec. 22, 2019 at the Hospice at St. Peter’s Hospital. Fr. McTavey was born on March 4, 1931 in Troy to the late John and Rebecca McTavey. The family were members of St. Joseph’s Parish and Father fondly recalled memories of the community and especially the parish center. He attended Catholic Central High School, graduating in 1947 at the age of 16. He then pursued his priestly vocation at St. Andrew’s Seminary in Rochester, then Our Lady of Angels Seminary at Niagara University. Fr. McTavey was ordained a priest in 1955 by Bishop William Scully at the Cathedral of the Immaculate Conception. After a brief stay at St. Joseph’s, Stillwater, he was assigned as an assistant pastor at Sacred Heart in Troy, teaching religion at Catholic Central. He then obtained an advanced degree in education from Siena College. In 1957 he was appointed vice principal and guidance counselor at the brand new Cardinal McCloskey Memorial High School on Elm St. in Albany. At the same time, he also served as an assistant pastor at Blessed Sacrament Parish in Albany. Father had a lifelong passion for New York sports teams and Broadway musicals, traveling to NYC whenever possible to attend a play or a game. Thus while at McCloskey he also produced many school plays. In 1962, New York State designated the property of the 5 year old school as part of the South Mall project. So it became Fr. McTavey’s responsibility, after becoming principal in 1966, to arrange the construction of a new school. Cardinal McCloskey on Slingerlands St. was opened in 1967. Fr. McTavey left McCloskey in 1972, when he was appointed pastor of St. Bernard’s Church in Cohoes. With his education background, while at St. Bernard’s he served as President of the Diocesan School board, and he was a fervent supporter of the local Cohoes Catholic School. Because several facilities for senior citizens were located in downtown Cohoes, Fr. McTavey recruited two Sisters of St. Joseph, Sr. Marie Jose Hickey and Sr. Margaret Totten, to minister especially to these seniors and it became a focus of St. Bernard’s ministry. Fr. McTavey was devoted to his mother, Rebecca, and took her on an extended trip to her native Ireland, from whence she had emigrated as a teenager. Fr. McTavey also was given a sabbatical in 1973 to study in Rome, at which time he managed to travel extensively throughout Europe. He remained as pastor of St. Bernard’s for 35 years, until he reached the mandatory retirement age of 76 in 2007. Fr. McTavey relocated to St. Mary’s, Crescent, where for some years he continued his ministry at both St. Mary’s and Holy Trinity in Cohoes. In his later years, Fr. McTavey was given care and support by his devoted nephew Michael (Nancy Champlin) O’Brien of Glenville, NY, his niece Aileen (David) Dirtadian of Clifton Park, NY, Dennis (Amy) O'Brien of Mechanicsville, VA and Patrick (Kristen) O'Brien of N. Greenbush, NY; his dear friends Jeanne Gracon and Sharon Sgroi. He is also survived by 8 grand nieces and nephews. He was predeceased by his brother John"Mick" McTavey and his sister Kay and brother-in-law Jack O’Brien. Calling hours will be from 2-6 pm Sunday at St. Mary's Church in Crescent, 86 Church Hill Rd. Waterford, NY 12188 Mass of Christian Burial will be celebrated at 11:00 am Monday at St. Mary's Church, Crescent with Rev. Joseph Cebula, Pastor, presiding. Interment will be in St. Joseph's Cemetery in S.Troy. Memorial contributions may be made to St. Mary's Church in Crescent or to St. Peter's Hospice Inn, 315 S. Manning Blvd. Albany, NY 12208.