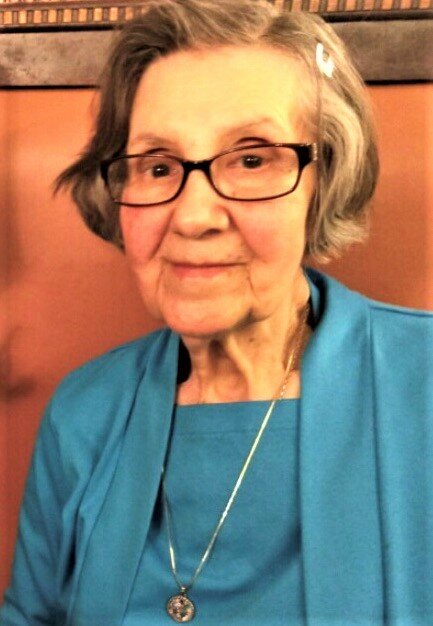 Please share a memory of Theresa to include in a keepsake book for family and friends.
View Tribute Book

Theresa Marie Tyrrell, 95, of the Eddy Village Green and former Clifton Park resident passed away peacefully on Tuesday April 5, 2022   She was born on May 12, 1926 in Troy, NY and was the daughter of the late Arthur and Rose Forget Catellier.  Theresa was a graduate of Catholic Central High in Troy.  She was the beloved wife of the late John F. Tyrrell.  She enjoyed traveling across the United States with her husband in their RVand had a wonderful life.   She was an avid Siena basketball fan and would try not to miss a game with her season ticket.  She was a faithful communicant of St. Edward the Confessor Church in Clifton Park.

She is was the devoted mother of Patricia (Frank) Giorgio, Maribeth (Brad Brash) Tyrrell and John (Veronica) Tyrrell; sister of the late Arthur Catellier, Ernest Catellier,

Funeral will be held at 11:00 Monday at St. Edward the Confessor Church, 569 Clifton Park Center Road Clifton Park, NY 12065 where the Mass of Christian Burial will be celebrated.

A Calling hour from 10-11 am will precede the mass in the chapel at Church.

Interment will be in St. Joseph’s Cemetery, Waterford, New York.

The family wishes to express their grateful appreciation to the entire staff at the Eddy Village Green for the tremendous care given to their mom.

To send flowers to the family or plant a tree in memory of Theresa Tyrrell, please visit Tribute Store
Monday
11
April

Share Your Memory of
Theresa
Upload Your Memory View All Memories
Be the first to upload a memory!
Share A Memory
Send Flowers
Plant a Tree