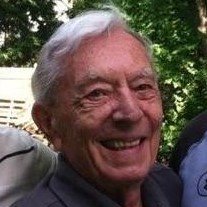 Richard H. Schaefer, 87, of Schuyler Ridge Residential Health Care Center and formerly of Babylon, NY, died on Sunday June 25, 2017 at his residence.  He was born on Dec. 28, 1929 in Jamaica, NY and was the son of the late Richard A. and Bertha M. Wetter Schaefer.  He was a graduate of Brooklyn Polytechnic High School, Brooklyn College and received his master’s degree from Columbia University.    Mr. Schaefer retired as Vice-President of Marketing and Merchandising for Lever Bros. in Manhattan after more than 35 years of service.  He was the beloved husband of Joan B. Kraemer Schaefer whom he married on June 17, 1951.  He was a coin and stamp collector and also enjoyed the outdoors especially going to the beach.

To send flowers to the family or plant a tree in memory of Richard Schaefer, please visit Tribute Store
Wednesday
28
June